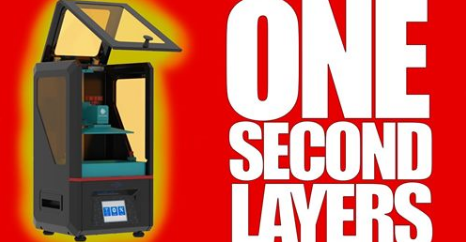 swap article with a guest post and it’s perfect. and this link is cleaner www.youtube.com/hirocreations 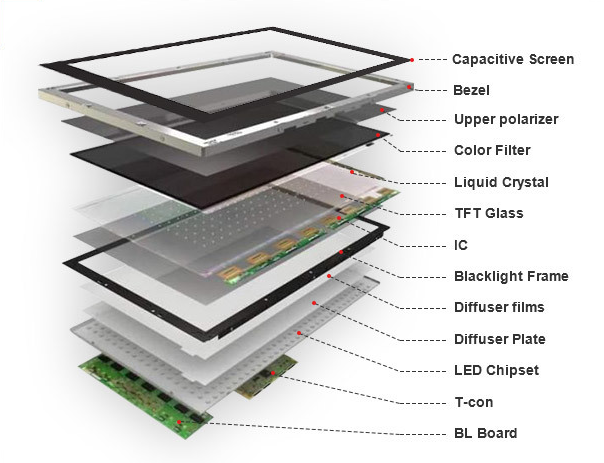 So 2021 is going to likely be the year of the Mono resin printer with all the major manufacturers all launching their own product offerings that use the much faster purpose-built screens. If you are relatively new to resin printing here is a quick recap of what mono screens are.

Mono screens, also known as Monochrome screens are black and white LCD displays that are purpose-built by several manufacturers specifically for resin printing. Unlike the RGB color screens which are the same types of screens used in cellphones, tablets, and laptops and were adapted for use in SLA resin printing.

Monoscreens have several advantages, because they have a single color vs multicolor pixels more pixels can be packed together to create a higher resolution display in the same screen size. Because they have been built without some of the filters and polarizers that make it harder for UV light passes through the screen more light is able to get through and cure the resin. The percentage ranges from 4% to 5% for monochrome screens which is a massive improvement over the mediocre 1% that most RGB color LCDs were able to manage.

Lastly, Monochrome screens have been built thicker and designed to handle intense UV light making their operational lifetimes significantly longer often as much as thousands of hours of rated life if properly used.

In general monochrome LCD masking screens is the next step in the evolution of MSLA resin printing technology.

Yasu, a costume builder who had to pivot in the middle of a pandemic to launch Liquid Artifacts a fast-growing shop that specializes in selling tabletop miniatures and gaming accessories.

He is also a big proponent of trying to recycle as much of my older hardware by simply upgrading the electronics and adding mods to a machine to keep it from succumbing to planned obsolescence as see no reason why a machine that was top of the line a year ago should be relegated to the landfill because there is a shinier machine available.

So he decided to take on the challenge to convert his OG 2019 Anycubic photon that was sitting unused on a shelf because he burnt out the stock board during an LCD change and breathe some new life into it.

Let’s see how Yasu did to upgrade his OG Photon to a 6-inch mono screen.

The main design constraint I decided to place on myself was to ensure that all the mods I would do could be reversible so that I had the option to chase a different design path if needed, to do that meant no cutting or drilling holes in the metal frame.

That’s a long-winded intro but not everyone is caught up on the fast-moving developments in resin printing.

This and many other experiences have given me a deep knowledge of what works and what does not when it comes to resin printing, and I am a huge fan of sharing knowledge with the community. So today the knowledge I am dropping is a loose how-to spectacularly void your warranty by converting an OG Anycubic photon into a monochrome powerhouse that can get print times as fast as .9 seconds at 50-micron layer heights.

For this build here is what you will need the following parts:

–There is a new version LED for 6inch mono

–I use PETG instead after finding the PLA is getting bend with high temp. 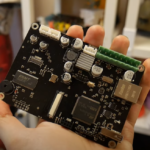 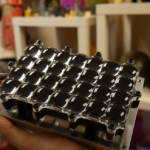 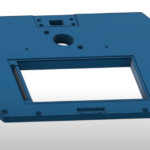 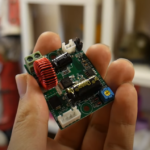 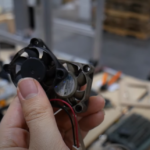 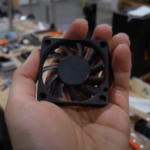 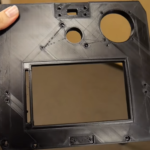 So now we get into the fun part, doing the mod.

First, we gotta effectively gut the entire printer it’s like a going out of the business sale, everything must go.

Out goes the board, light source, screen, even the screen plate that holds the screen. 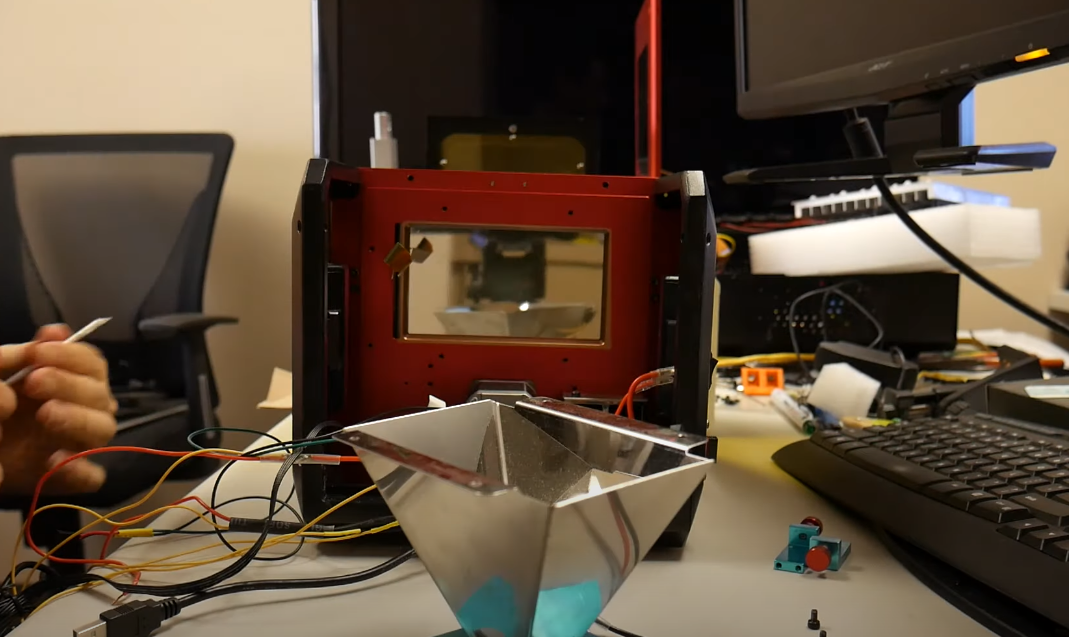 Once the screen plate has been separated from the chassis you will want to remove the motor leadscrew assembly and then remove the z-axis. Now please don’t be me and wear gloves on this step as the leadscrew and Z-axis is saturated with grease and are rather messy to handle without gloves. 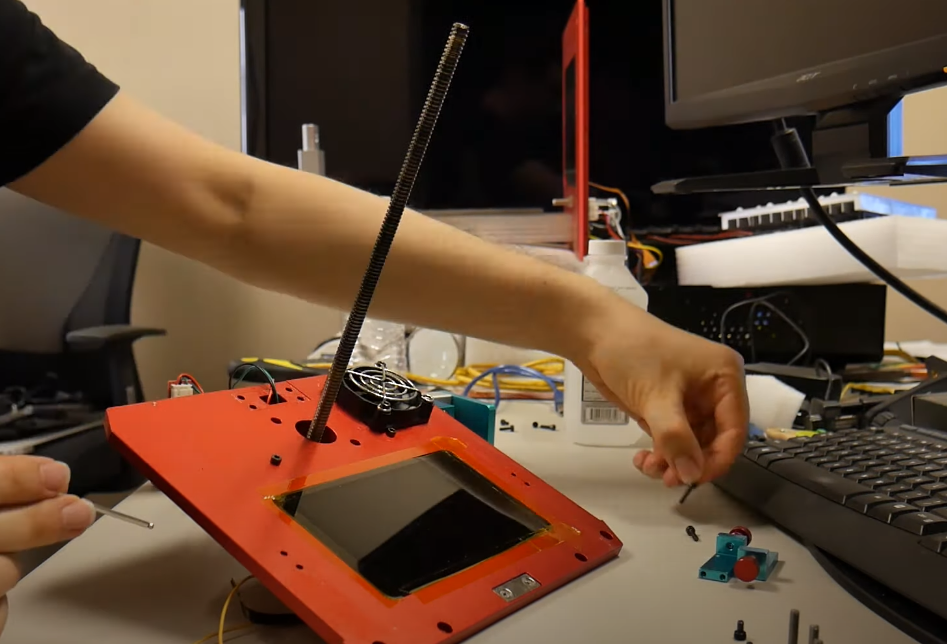 After that, you will want to remove the carbon filter and fan assembly, if you are lucky and take good care of your machine it will be clean and resin-free. If you are unlucky like me then it will be pretty saturated with resin and pretty much only good for being thrown away. The carbon filter is honestly optional and you won’t really change your performance not having it–especially if your workspace is well ventilated.

While you are taking it all apart, be sure to label and keep all the screws and hardware in a place where it won’t get lost.

At the end of all, the screen is left, you are free to either leave the screen on it as is or remove it and repurpose it for another project that’s your call.

If you’ve ever had a resin overflow or a splash then there likely will be uncured resin on parts of the machine–you really will want to take the time to use some alcohol and clean all the parts thoroughly,

At this step, you should be left with a hollowed-out chassis and power and USB related wiring which stays and gets used in the new machine parts. 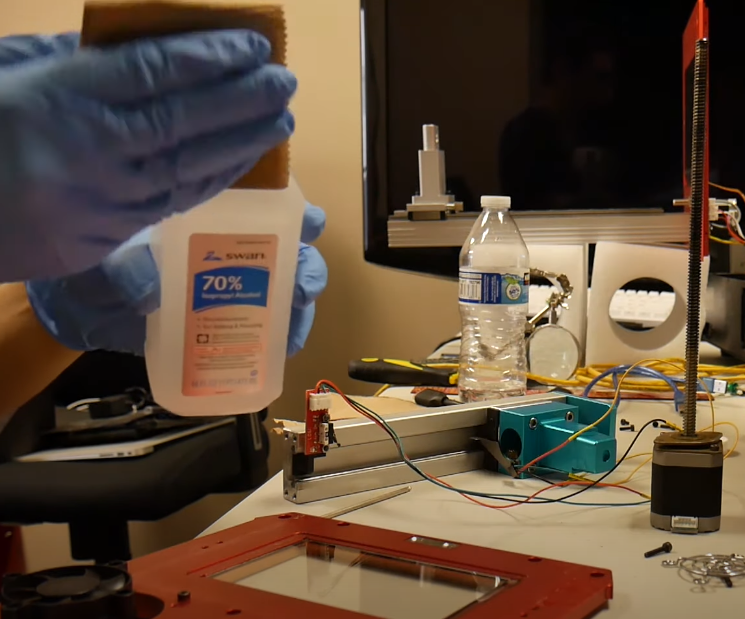 As I mentioned before there are a few parts that need to be printed to make this build work, which I have uploaded to GitHub as an open-source attribution project.
For starters you need a new top plate, you also need a plate that holds the light source and the fans that cool it.

Optional is a printed board mount, I believe the stock metal board mount should fit with the rest of the additions. I won’t know because I lost mine and had to create a replacement.

My main recommendation is to use PETG as the material of choice for printed parts, it rigid, handles higher ambient temperatures than the light source and motors generate, and is resistant to dissolving if the resin has spilled on any part of it. PLA will also work but if your motors run hot or don’t have enough cooling fans you may risk having parts deform on you as it did for me on one of my early iterations of the mod.

At this juncture, we will be doing all the steps we did to disassemble the printer in reverse with the new parts. Start with putting the Z-axis linear guides back on the newly printed plate.

Then screw the leadscrew motor–keep the build plate holder at the top of the printer, as it keeps things easy for you later on. 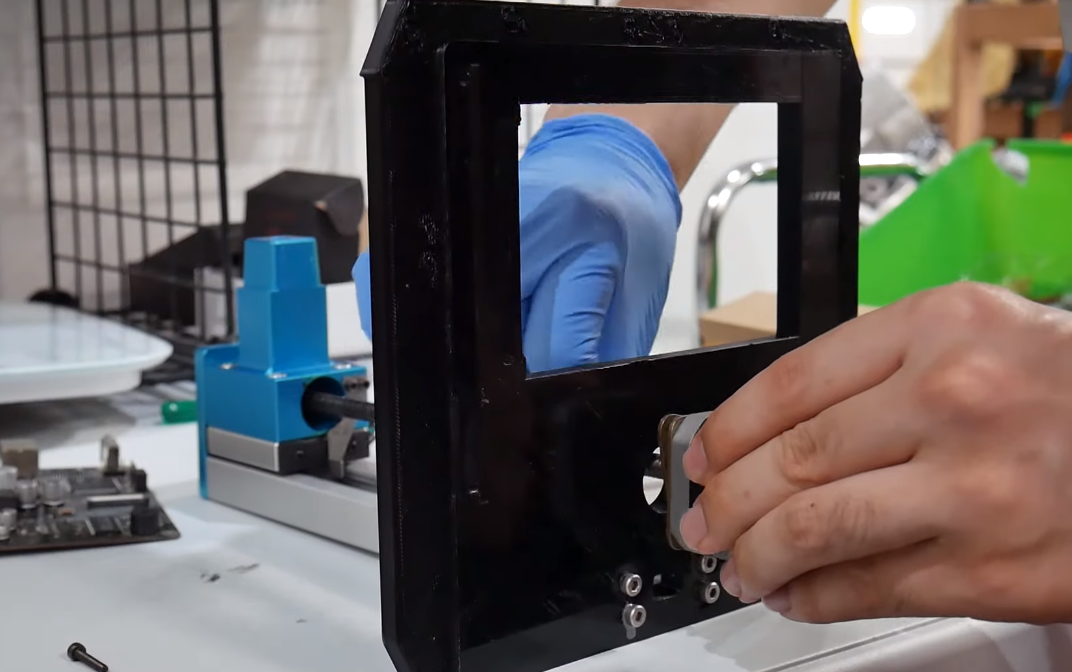 Not shown here is you really want to mount the control board on the printed screen holder as trying to screw it in as I did really is more trouble than it had to be. Don’t be me.

If your printer is well-tuned and there are no support remnants then the plate should slide in nicely but stay snug with no play, the screw holes were you secure the plate are set so that the stock metric screws that were originally in the printer can easily thread securely into the plastic–so you don’t have to mess with any inserts or use different hardware. If you are having trouble getting the plate to fit, you may have to tweak the settings on your printer for better dimensional accuracy–if there are small differences you can file it down quickly with a metal rasp. 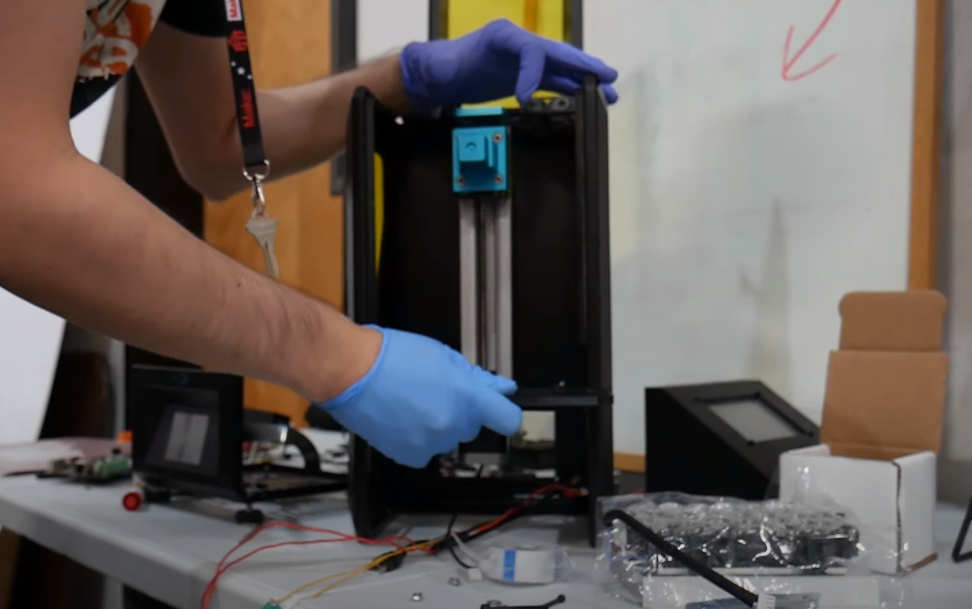 Let’s talk electronics for a moment, the chituboard L v3 has an identical layout for all the connectors, this makes changing them very easy no soldering or crimping is necessary–which compared to other modifications is a sweet bonus.

In the description below I’ve included a link to the chituboard manual where there is a handy wiring guide on what goes where if you have any confusion.

The stock board on OG photon is ChiTu L V1 which is discontinued. 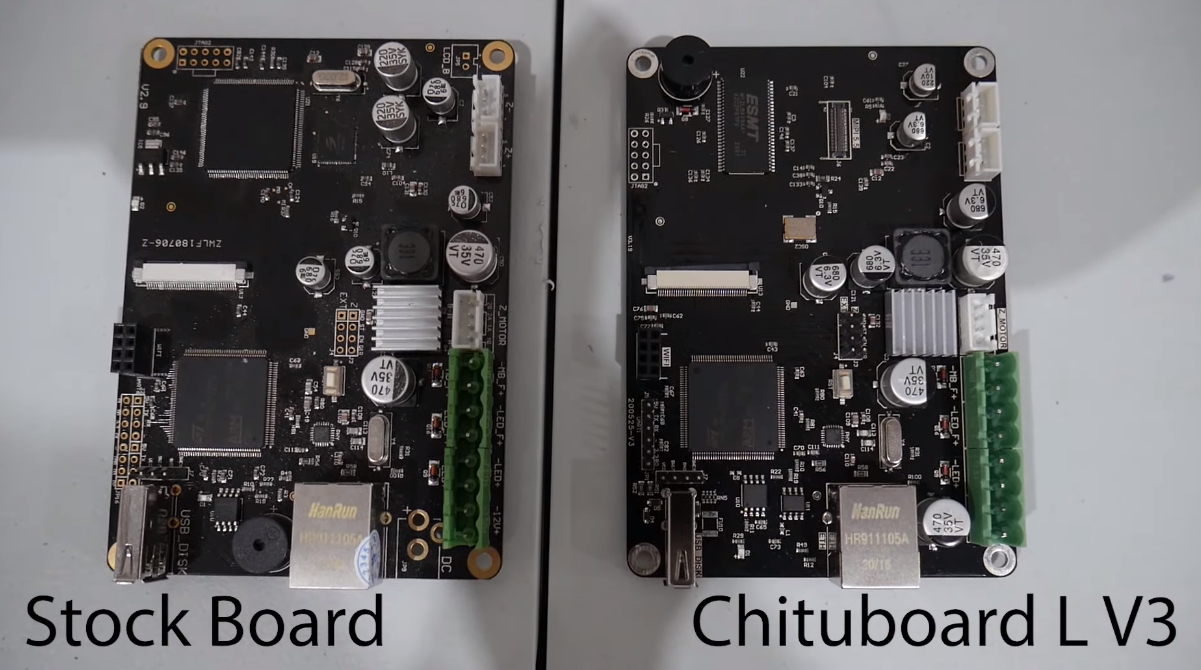 Let’s talk about the light source, we are swapping the central COB and reflector array with a much stronger 24v parallel array with collimator lenses that sounds like a lot but you really want this to really take advantage of the larger screen area and evenly distribute light. 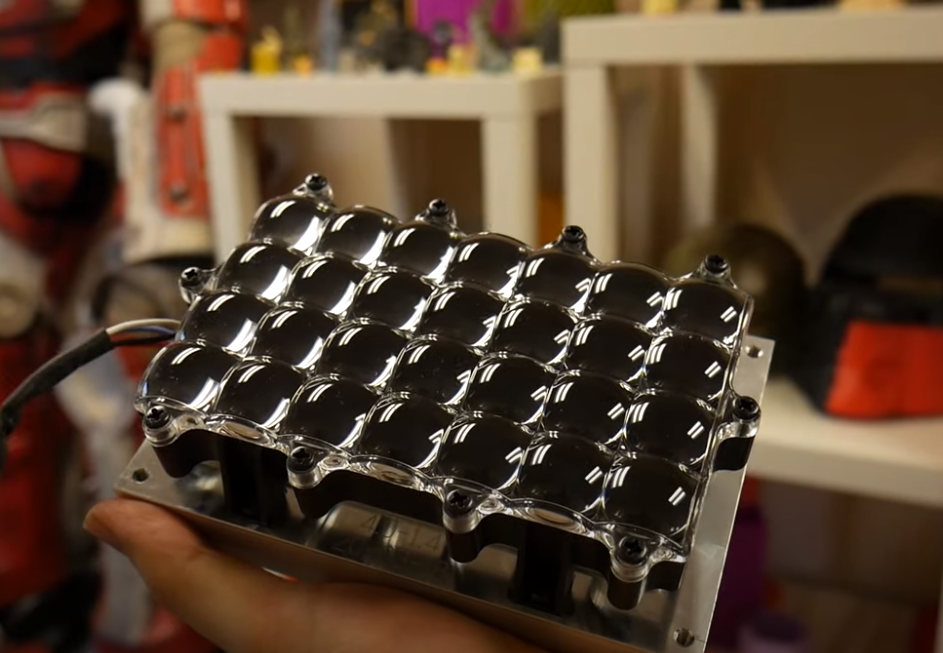 But it does need an amount to effectively hold it and to hold the cooling fans that keep it cool. This is where the second printed part comes in handy for this you will need a few extra bits of hardware including a pair of m5 square nuts, a pair of m5x15mm, m5 washers, and lastly a pair of m4x10mm bolts. 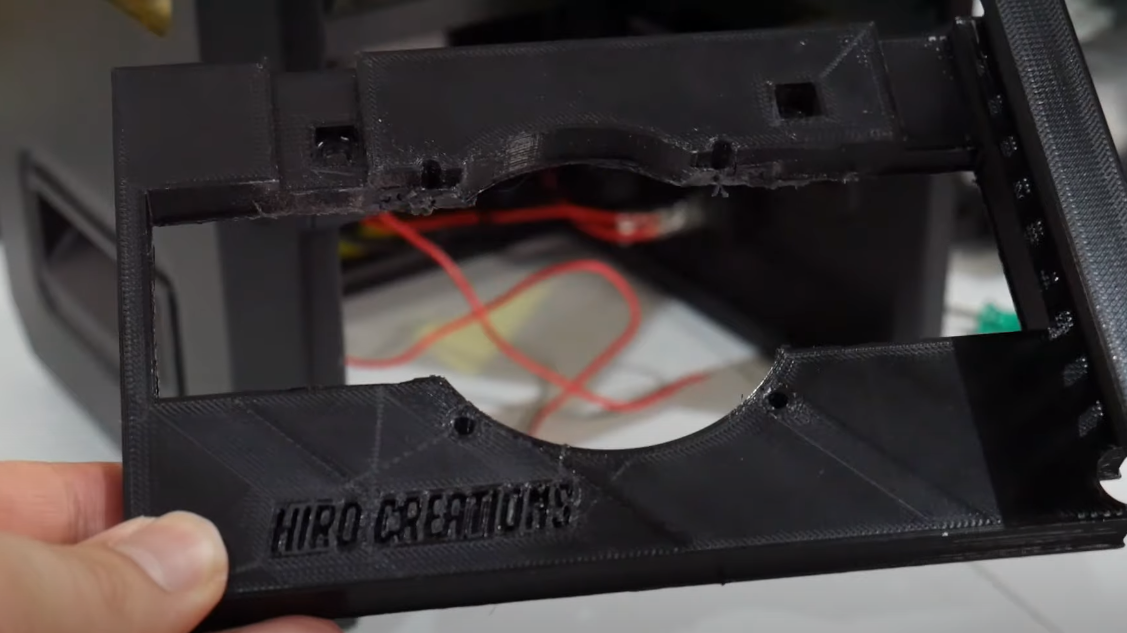 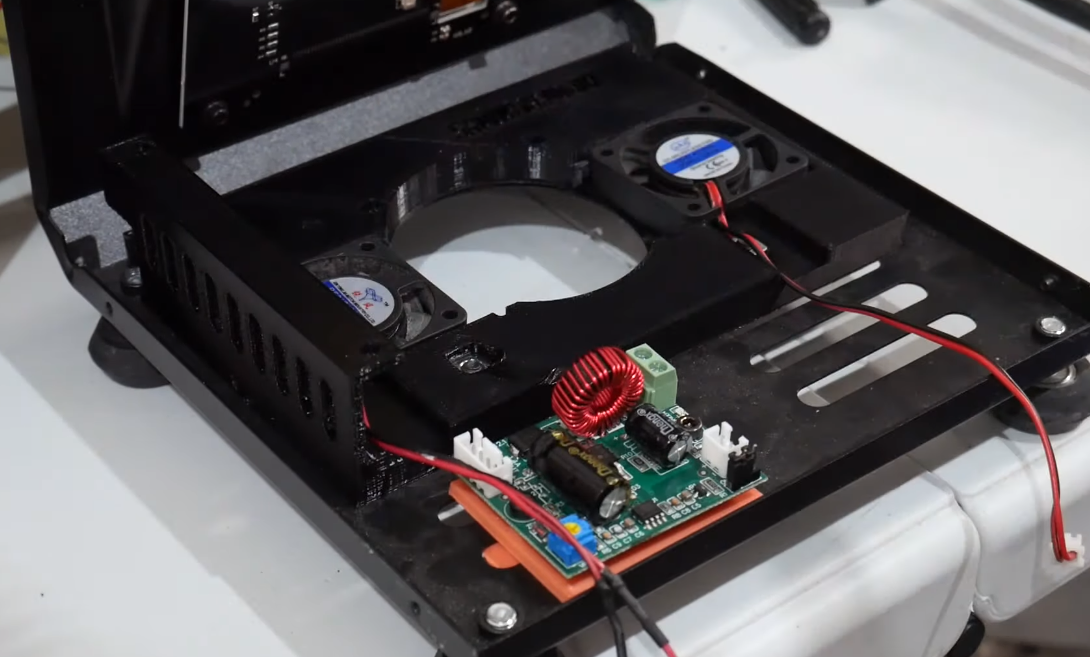 First up you will want to secure the rack so it lays flat on the bottom of the metal casing, then once secure you will just slide the light source in so that the top of the heat sink rest under the holding lip on the right side of the printer. Make sure the wiring is on the right side. Then screw in the m4 screw into the threaded inserts on the heatsink to secure it. Take this moment to connect the light source to the boost converter and connect the fans into the always-on motherboard fan port. 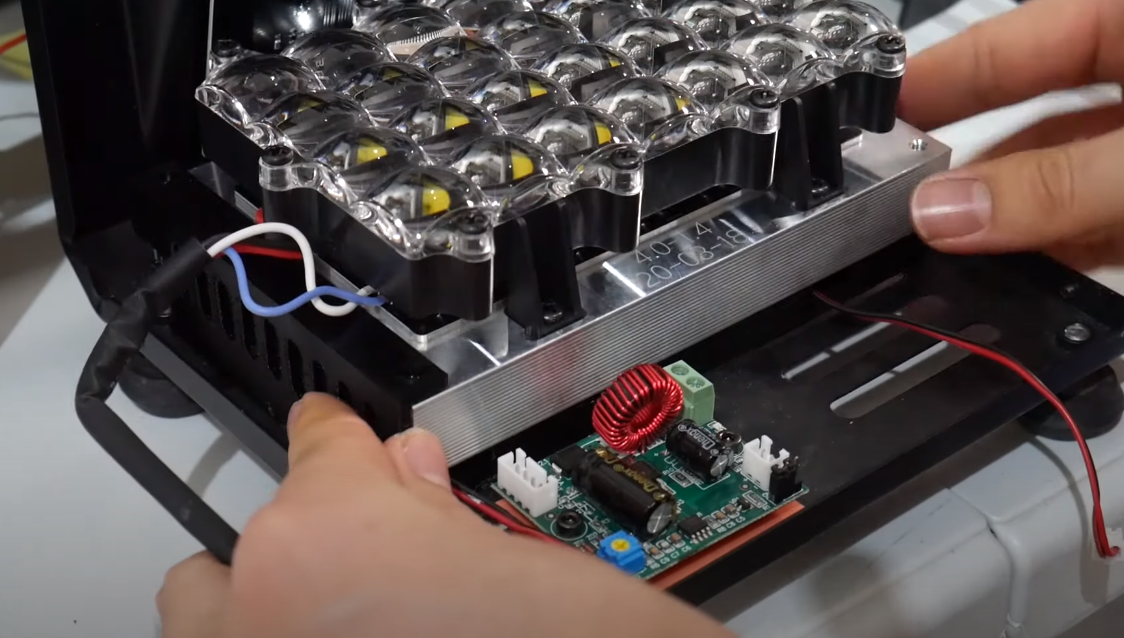 Here is an overhead shot you can pause to sorta see where everything is at, apologies for the poor wire management in this shot.

From there you should be clear to very carefully lift up the case and lower it gently onto the bottom part of the enclosure and bolt the two parts together. 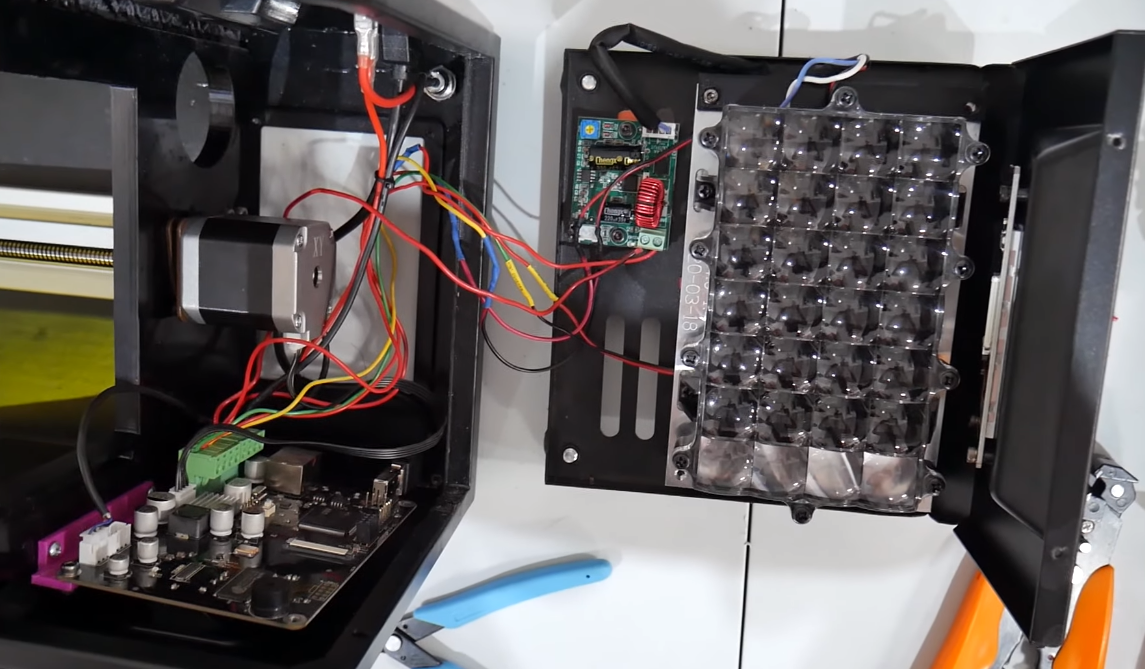 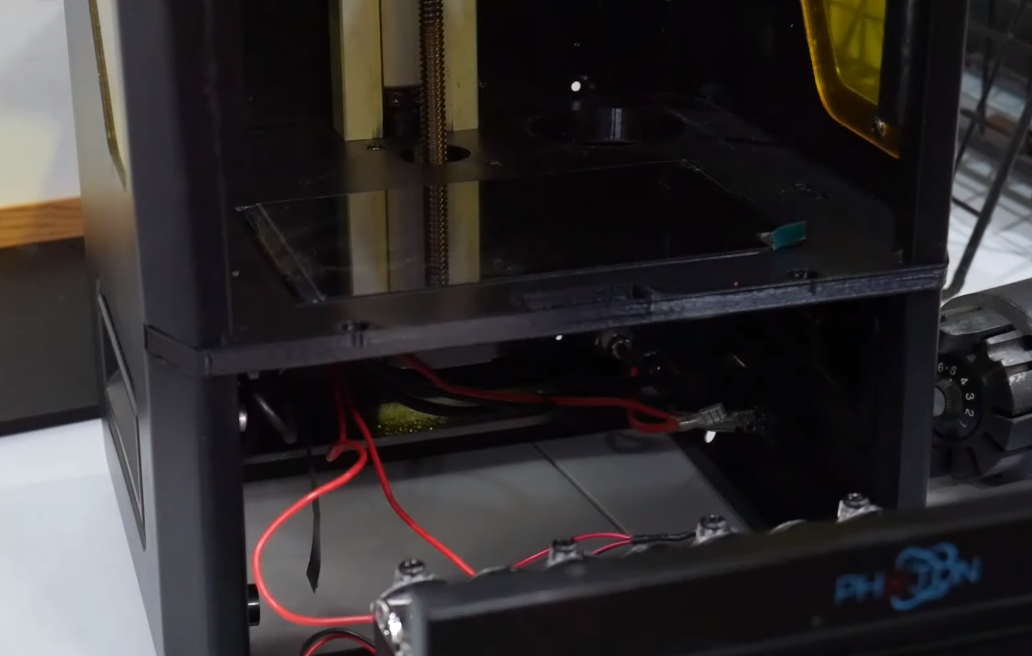 And boom you should have a working machine when you do some testing. Remember always to dry testing prior to doing anything with actual resin to make sure that there are no bugs or mistakes in the modding process. 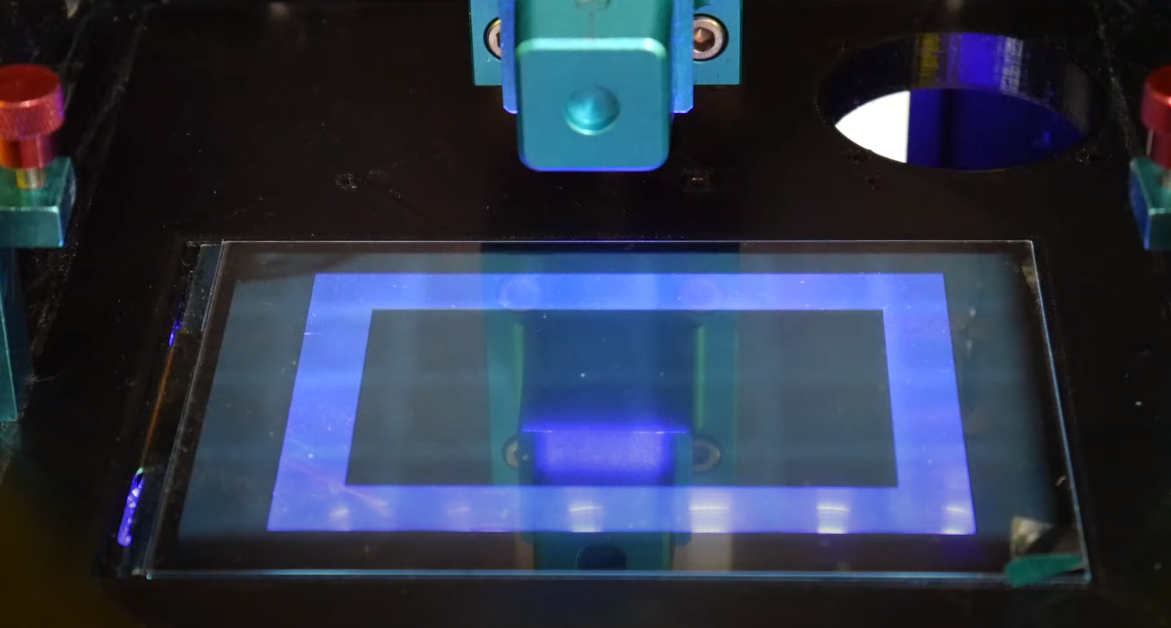 The firmware preloaded on the chituboard feels nearly identical to what you would find on the Mars or Photon, so you really don’t need to worry about changing any firmware parameters which you can do with a Gcode file that is linked in the description below. 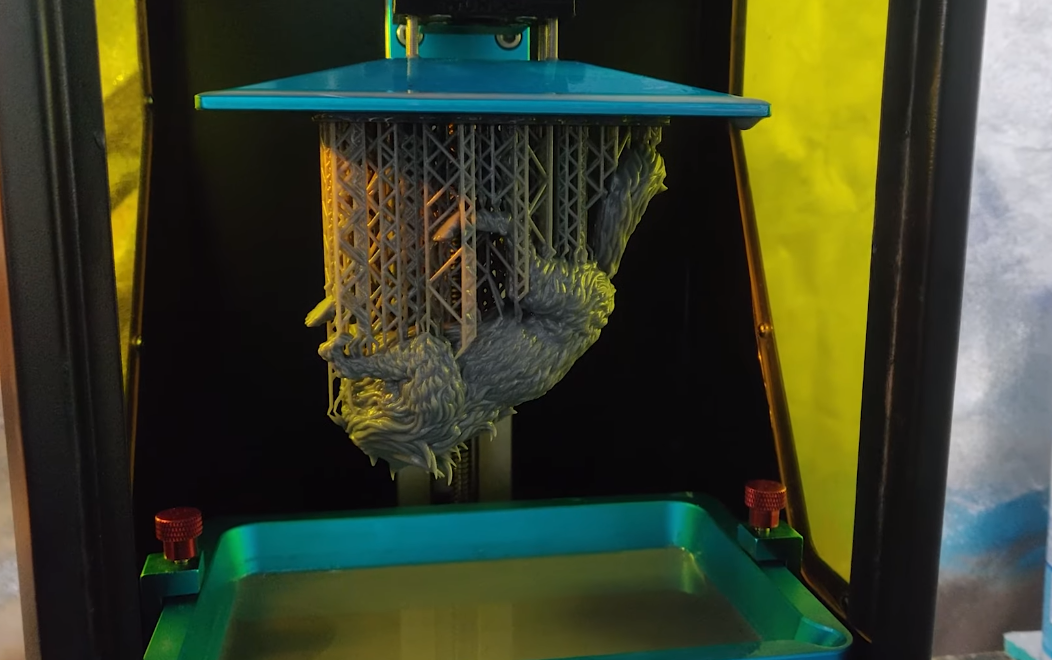 I am still in the early stages of stress testing this mod so far but I am really happy with the quality of the prints I am getting relative to the expense and efforts to apply this mod. Given that I always prefer to reuse parts and machines instead of buying new this mod was a no-brainer–even if the cost was the same as a new machine, but things may vary differently for your situation.

swap article with a guest post and it’s perfect. and this link is cleaner www.youtube.com/hirocreations